Bill ‎ – Mar 29, 2011 – Customer Service!! My call was answered immediately. APlus showed up exactly when promised. The work was done within an hour at my home as promised and I don’t have to replace my headlights. I highly recommend them to anyone needing any of their services. 3/29/2011
Mar 22, 2011 – I came across A+ Windshield on Google and it saved me from having to replace my headlights. I got a quote from another company but the guy was never available and would not return my calls. Bernard was timely and the job only took about an hour and my headlights look brand new. A+ exceeded my expectations and I would recommend them to anyone!

Candy – Jan 20, 2011 – Very impressed with the work Bernard with A+Plus Windshield Repair & Headlight Restoration – I have a 2002 CLK320 Mercedes  & my headlights were very discolored & foggy – I tried the product should at a local auto store & it cleared a little & then seem to get worse – the procedure he did on my headlights turned them back like new – very clear – excellent work & he was dependable & very polite! I will recommend to everyone!!!!

BrownBear ‎ – Oct 5, 2010  – Very Professional !! A Plus delivers what they promise. Bernard showed up on time and did a great job. Headlights look better than new…Thanks !!

trudyj ‎ – Oct 1, 2010 – A+plus gets and AN A PLUS I just had my headlights restored,and WOW what a difference. Mr. Bernard Cook came the same day I called, explained the difference about replacing new ones vs restoration.. He was very friendly and professional. I would highly recommend him to all who needs headlight restoration. Job well done.
A Google User ‎ – Sep 24, 2010 – Apluswindshield.com is really A++++++ Bernard responded faster than most 911 calls. Within just a few hours he was at my house repairing a very large & difficult windshield chip at about $80 less than another service had quoted. His personalized, friendly and professional manner was icing on the cake. I highly recommend his service to anyone needing windshield repair. Don’t neglect that chip since it will soon turn into a larger crack which may not be repairable and require a new windshield costing hundreds of dollars.
Chad Mitchell ‎ – Sep 8, 2010 – Thumbs Up for A Plus Windshield Repair A Plus / A+ fixed two large cracks in the windshield of my Nissan Murano. It saved me $200 by not replacing the entire windshield. Bernard Cook provided timely and professional service. I highly recommend him and his company.
A Google User ‎ – Aug 27, 2010 – Quality work is hard to find! I recomended these guys to all my co-workers and friends. They were on time, professional and well worth my peace of mind. Thanks Bernard!
A Google User ‎ – Aug 10, 2010 – fantastic headlight service… I have a 2004 Subaru Forrester and both headlights have dimmed with age so much that they were not bright anymore. I called A+ because they are mobile and would come to my house. I made an appointment and the guy said he would be there at 10 o’clock and the job would take between 45 minutes and an hour. At 10 o’clock sharp the owner, Bernard, rang the bell. About an hour later he was done and the headlights were gleaming, like new. He was prompt, professional and efficient. A fantastic service.
A Google User ‎ – Jul 20, 2010 – Great service! I sent a request to Bernard for a quote on last Wednesday and within an hour he responded and setup an appointment to look at my windshield. Within 24 hours, Bernard completed my windshield repair, which was a 6 – 8″ crack on the windshield of my 2009 BMW. Bernard was very professional and did a great job with the repair. I would recommend Bernard to anyone in need of a windshield repair. Shaw

Headlight Restoration Near Alpharetta: Cleaning headlights is not as simple as you think. Those DIY and Homemade remedies only work...
Read More

Save your windshield, Save your money

What should you do if you get a crack in your windshield and you can't get a repair right away?...
Read More

The purpose of a windshield repair is to seal up the crack that was caused by a rock or small...
Read More

What causes a windshield chip to spread into a long crack?

Predicting when and why a small chip in your windshield will spread into a long crack is as hard as...
Read More

What’s the largest crack that can be repaired on a windshield?

The truth is that a really good and experienced windshield repair technician can repair a crack from one end of...
Read More

Does over the counter headlight restoration kits really work?

As a professional headlight restoration technician, I have never used an over the counter kit to restore headlights but around...
Read More

What to expect from a windshield repair?

The primary purpose of a windshield repair is to seal up any small cracks in your windshield with a quality...
Read More 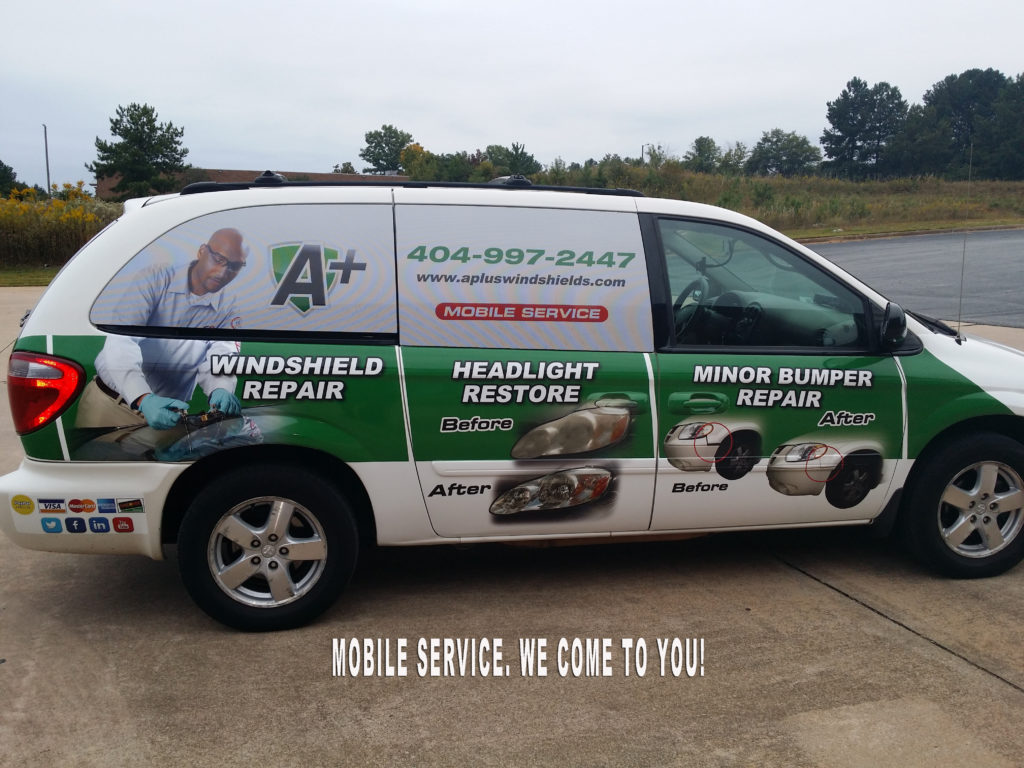 Slider A Plus Van

Mobile Service - We Come to YOU!
Read More

I was so pleased with A+ Minor Auto Repair. I had a small ding in my front windshield and was impressed with the convenience of not having to leave my place to have the repair done. Bernard was running early, called to see if an earlier time would work (and it did), and provided very efficient and friendly service. I highly recommend this company!

The job Bernard performed was nothing short of exceptional. He was able to service my vehicle the same day I called and upon arrival removed two chips out of my windshield in less than the estimated time he relayed to me. I was under the impression that the repair would merely seal the cracks and the lines would remain but that was not the case! The blemishes are nearly gone and from a glance seemingly appear as if they never existed! I am beyond elated and satisfied with the work that was performed! And to make it all better the price is very reasonable! I would suggest this company to anyone with windshield chips. Get them done now before it spreads!

They always rock it here! In the one off chance they have an off day... Give them a break 🙂

I was so pleased with A+ Windshield repair. Auto Repair. I had a small dinI had a small rock chip in my front windshield and Bernard came right over and took care of it! Nice guy, very professional and quick turnaround! Thanks so much!

Deontate was amazing! He was timely, professional, and thorough! He explained the service and also gave tips on upkeep! If needed, I would definitely book with them again!

Quick and professional. Top notch service and communication. Would definitely recommend to friends and family.